There’s quite a lot of code inside Jena, and it can be daunting for new Jena users to find their way around. On this page we’ll summarise the key features and interfaces in Jena, as a general overview and guide to the more detailed documentation.

At its core, Jena stores information as RDF triples in directed graphs, and allows your code to add, remove, manipulate, store and publish that information. We tend to think of Jena as a number of major subsystems with clearly defined interfaces between them. First let’s start with the big picture: 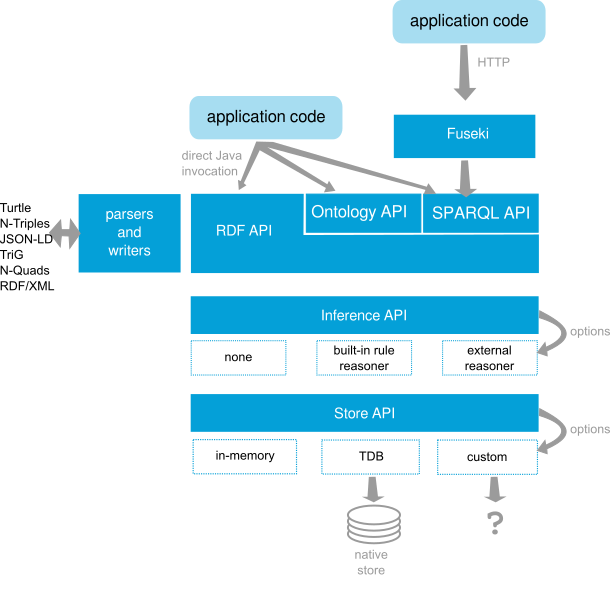 RDF triples and graphs, and their various components, are accessed through Jena’s RDF API. Typical abstractions here are Resource representing an RDF resource (whether named with a URI or anonymous), Literal for data values (numbers, strings, dates, etc), Statement representing an RDF triple and Model representing the whole graph. The RDF API has basic facilities for adding and removing triples to graphs and finding triples that match particular patterns. Here you can also read in RDF from external sources, whether files or URL’s, and serialize a graph in correctly-formatted text form. Both input and output support most of the commonly-used RDF syntaxes.

While the programming interface to Model is quite rich, internally, the RDF graph is stored in a much simpler abstraction named Graph. This allows Jena to use a variety of different storage strategies equivalently, as long as they conform to the Graph interface. Out-of-the box, Jena can store a graph as an in-memory store, or as a persistent store using a custom disk-based tuple index. The graph interface is also a convenient extension point for connecting other stores to Jena, such as LDAP, by writing an adapter that allows the calls from the Graph API to work on that store.

A key feature of semantic web applications is that the semantic rules of RDF, RDFS and OWL can be used to infer information that is not explicitly stated in the graph. For example, if class C is a sub-class of class B, and B a sub-class of A, then by implication C is a sub-class of A. Jena’s inference API provides the means to make these entailed triples appear in the store just as if they had been added explicitly. The inference API provides a number of rule engines to perform this job, either using the built-in rulesets for OWL and RDFS, or using application custom rules. Alternatively, the inference API can be connected up to an external reasoner, such as description logic (DL) engine, to perform the same job with different, specialised, reasoning algorithms.

The collection of standards that define semantic web technologies includes SPARQL - the query language for RDF. Jena conforms to all of the published standards, and tracks the revisions and updates in the under-development areas of the standard. Handling SPARQL, both for query and update, is the responsibility of the SPARQL API.

Ontologies are also key to many semantic web applications. Ontologies are formal logical descriptions, or models, of some aspect of the real-world that applications have to deal with. Ontologies can be shared with other developers and researchers, making it a good basis for building linked-data applications. There are two ontology languages for RDF: RDFS, which is rather weak, and OWL which is much more expressive. Both languages are supported in Jena though the Ontology API, which provides convenience methods that know about the richer representation forms available to applications through OWL and RDFS.

While the above capabilities are typically accessed by applications directly through the Java API, publishing data over the Internet is a common requirement in modern applications. Fuseki is a data publishing server, which can present, and update, RDF models over the web using SPARQL and HTTP.

There are many other pieces to Jena, including command-line tools, specialised indexes for text-based lookup, etc. These, and further details on the pieces outlined above, can be found in the detailed documentation on this site.